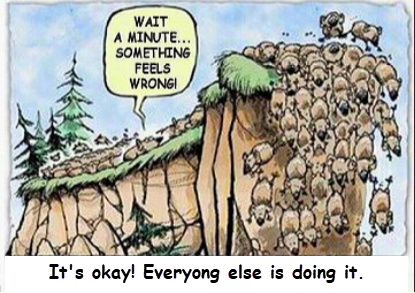 Minnetrista is poised to step off a steep ethical cliff. Minnetrista staff and legal counsel advocated Monday night for using Minnetrista’s $579,000 Coronavirus Relief Fund (CRF) on city payroll even though none of Minnetrista’s personnel have been substantially dedicated to COVID-19 related activities. None.

The city’s Administrator had to sign the form (below) requesting the funds, certifying their use according to guidelines which clearly state that any expenditure included in the city’s budget prior to the pandemic is not allowed.

The funds have now been received by the city. But guess what? Despite the intention to spend the funds on payroll that was budgeted before the pandemic (specifically public safety payroll) the $579K of revenue is not reflected in the city’s projected 2020 fund balance that was provided to the council at its work session Monday night and therefore will not reduce the city’s preliminary tax levy.  **See update below re prohibition on federal COVID funds being used to reduce the tax levy.**

I attended a League of Minnesota Cities webinar on CRF reporting last week where at approximately 24:40 they talk about how Minnesota Management & Budget (MMB) doesn’t plan to audit reports and that local governments are on the “honor” system.

What is even more concerning is that our city attorney from Kennedy & Graven indicated the MMB makes a presumption that all payroll costs reported are substantially due to COVID-19 related activities. He also seemed confident that because other Minnesota cities were using the funds for payroll that Minnetrista could too.

From attending the webinar on CRF fund reporting requirements, it was clear the state does not want to be in a position of advising cities on whether or not their spending qualifies under the guidelines. Making the “presumption” that reported payroll spending is due to COVID-19 is their way of looking the other way.

I had proposed using Minnetrista’s CRF money to address the city’s information technology architecture and it’s ability to support remote operations which has been difficult under our current infrastructure during this pandemic. That could have been a legitimate use of the funds.

It was decided to check with the state auditor to see if Minnetrista could legitimately claim payroll expenses and then to report back to council. My guess is the auditor will just say they presume the city is following the rules.

Unfortunately we have individuals on the council and staff that have no problem promising to follow the rules and then deciding not to. As long as they can get away with it.

Readers can listen to the work session and council meeting where these issues were discussed Monday night.

**UPDATE 8/8/2020 – Learned from a state legislator today who read the post that using federal COVID funds to reduce the city’s tax levy is explicitly prohibited. Likely the reason federal CRF rules say a city cannot spend the money on previously levied categories budgeted prior to the pandemic, as Minnetrista is contemplating.

MINNETRISTA HIDES 65% FEE INCREASE FROM PUBLIC – Anyone reading the Minnetrista city council agenda for June 15, 2020 would never have known the item titled “Res. No. 068-2020 Approving Recycling Services Contract with

Waste Management of MN for September 1, 2020 – August 31, 2025″ called for the approval of an initial 41% increase over last year’s recycle fee and by the end of the five year contract would approve a whopping 65% increase over the 2020 fee.

This kind of deception is egregious and unacceptable but apparently not to the Mayor or other council members who voted to approve the increase that evening on a 4 to 1 vote. Below is the memo from staff to the council explaining to the council, and more importantly to the public, what the resolution proposed. The actual resolution itself, below as well, makes no mention of the increase. (Exhibit B referenced in the memo just listed the new rates but did not compare them to 2020’s). 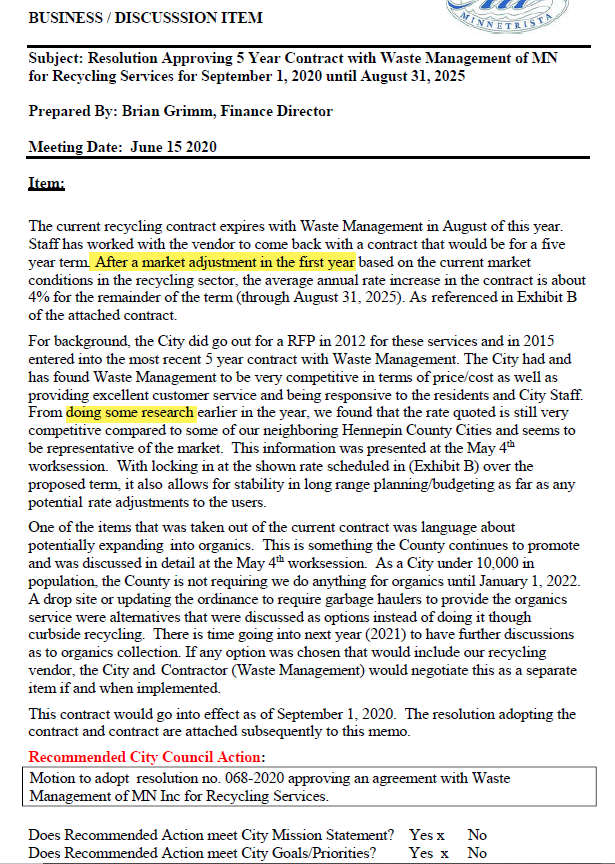 City staff appears to think that “doing some research” on competitive rates excuses them from doing an actual Request for Proposal (RFP) from several companies to ensure rates Minnetrista residents pay are competitive. My recommendation for doing an RFP was not supported by staff or council at a previous work session. 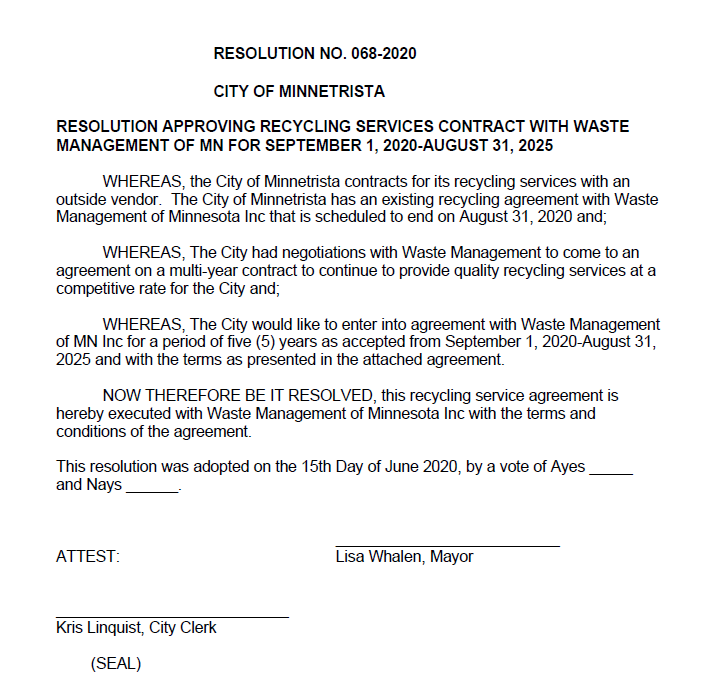 Mayor Lisa Whalen, obviously not in agreement with my concerns about this deceptive tactic to avoid complaints from residents, asked me “Ms. Bruce, what are the dollar amounts?” knowing the monthly recycle fees are small compared to others. What she doesn’t get is that Minnetrista residents object to deception.