GREENSTEP CITIES RED FLAGS: Mayor Whalen invited a representative from the GreenStep Cities program to address the city council last August. Enticed by the lure of recognition and their seemingly benevolent mission, “Minnesota GreenStep Cities is a voluntary challenge, assistance and recognition program to help cities achieve their sustainability and quality-of-life goals,” it gained legs with staff and was advocated again at the city council’s strategy meeting in February.

When the GreenStep representative was asked last August about where their funding came from they said it was primarily nonprofits, foundations, and grants. What they failed to disclose is they have two major funders, one of which is the Met Council. And we all know the Met Council’s allegiance to local government autonomy.

Red flag number one: Not being transparent when asked a direct question about funding sources.

In conversations over the weekend I learned from one of our state legislators that the GreenStep Cities program is “Repackaged from what was formerly known as Agenda 21 (for the 21st Century) GreenStep appears to be an obfuscated friendlier name for the same thing.”

Those unfamiliar with the United Nations Agenda 21 need only know it didn’t receive a warm welcome in the United States, with states passing resolutions condemning it and one even passed legislation prohibiting government involvement in the program.

The GreenStep Steering Committee is comprised of representatives from several nonprofits that are all climate change evangelists working together with the University of Minnesota, League of MN Cities, and various state agencies. 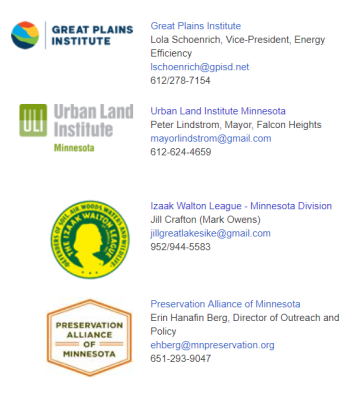 Red flag number three: Human caused climate change is a controversial topic and there is no diversity represented on the steering committee.

This is not a program that will benefit the Minnetrista electorate. In fact, the sample ordinances they provide to cities appear to be designed for more government control over building regulations and private property use.

No award from the League of MN Cities is worth this.