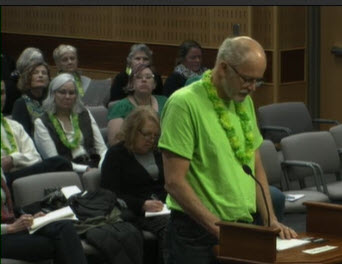 a resolution implementing the Met Council’s GreenStep Cities program last night. In a 4-3 vote the council voted not to pass the resolution.

I was struck by the openness of the council’s proceedings giving everyone, on both sides of the issue, ample time to address the council. Many went over their allotted time and others yielded their time to others so they could speak longer. There was a genuine interest on the part of the council to make sure everyone, absolutely everyone, was heard.

I was struck as well by the discussion that followed by the Plymouth council members. Each councilor was recognized and given the opportunity to express their position, uninterrupted, for as long as they needed. No one’s motivations were questioned or discredited.

Issues like GreenStep Cities are polarizing for communities in the metro area. It was a testament to Mayor Jeff Wosje’s leadership that he allowed everyone the opportunity to be heard and expressed a sincere appreciation for each and every voice.

Councilor Prom, speaking about the controversy around the program being truly voluntary, commented “This is the most impressive push for a voluntary program that I’ve ever seen in my life.”

The city of Minnetrista has not adopted a resolution to join the GreenStep Cities program and my hope is they will choose, as Plymouth has, to put city residents first above an agenda driven by an outside, unelected organization that is pushing it’s reach into local governments to enforce what they subjectively believe are “best practices.” I think Minnetrista can judge that for itself.

Thank you to all the people that cared enough to show up, speak or just attended. It was nice to see a community involved and concerned for it’s future. Even nicer to see our representative government work the way it’s supposed to.